Introducing them to Bio-Sand filters

Aim: An activity to show them a cause and effect action using water test vials and introduce them to the Bio-Sand filter

Activity: I could demonstrate to them how to make a bio-sand filter along with SODIS and tell them the importance of these two in conjunction. They can test the water they put in, before and after filtration using the H₂S bottle test. After that, they can make their own sand filters individually or in groups and keep them at school and use the water that comes from this filter.

Inference: Through this, the children might get to know that the water can be impure and there are methods by which they can take initiative to get clean water for themselves and their class/community.

I showed them a video on how the sand filter works before they began, so that they would have an idea of how to go about making it. In groups of five, they made their filters, each competing to make theirs faster and better than the rest of the groups. They kept coming to me to 'check' if they were doing it right. It was the first time they were working with m-seal and cutting up material. They found it very exciting. Once their m-seal had dried, we went on to text the filters. One groups failed because their straw was cut at the wrong place and it started to leak, but four others worked right. They looked at it in awe when muddy water went through one end and clear water appeared through the other. One of them volunteered to come up and explain what she understood of the whole process. She was so enthusiastic that she even made diagrams of the filter in her book for herself to remember :) I was so happy there were students like this. The best moment was when they all came screaming saying "ma'am straw, ma'am gum" and I asked why they wanted these things? They replied saying they wanted to make one for themselves at home. They also tested the water that came out using the H2S strip test to find that is was not bacteriology contaminated. Some of them took bottles back home to test the water in the keres near their homes. 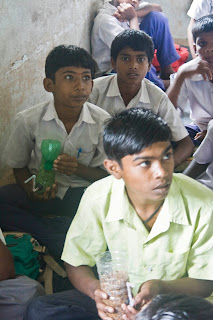 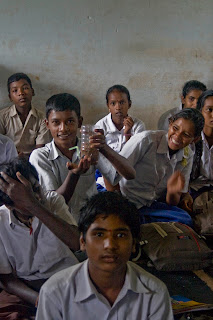 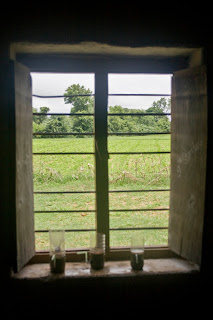 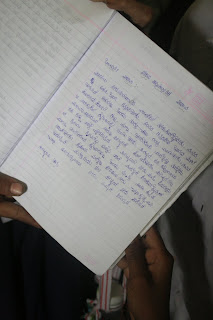 Introducing them to AT like this, something that they can make and see the effects for themselves was a good experience. They probably enjoyed it too. After the activity, when I asked someone to give me a summary, many of the kids were shy and some didn't know! So, if learning by just looking at it in textbook, none of them would have known. They said they had been studying about sand filters since 5th standard, but had never made one, even though it was so easy to make it. 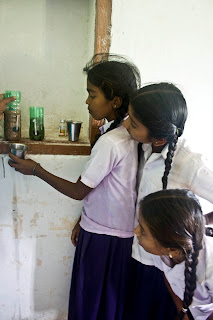 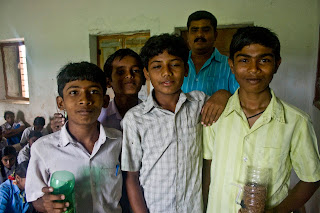 Testing the filters they made

Sushma explaining to the class what they had done that day
Posted by Aajwanthi at 8:24 PM