Initial activity idea
Activity: To trigger off initial thoughts, I could show them some slides or put up some charts with of what it takes to be clean and healthy. What are things one must do in order to use the available resources like water, not waste it, yet maintain personal and public hygiene?
Triggers for good health and sanitation

The quick presentation I showed them to trigger off a discussion

I want to make flash cards that each have one icon related to health or hygiene. I will show them those cards and they can raise their hand to tell me how many of them actually follow those practices that are essential. Then, we can go around the campus and stick these cards in the places they belong in. (Hand washing with soap near their tank, boiling water before drinking near the pots they store water in, etc.) 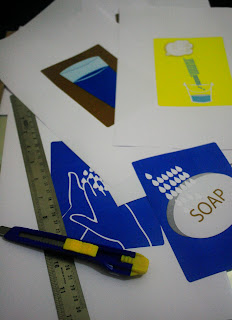 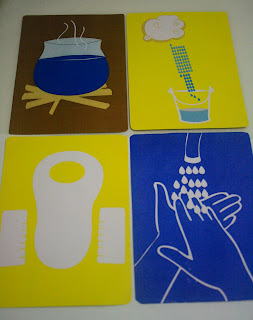 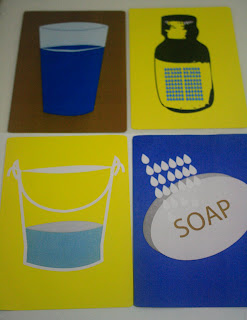 The flash cards that we stuck up in campus

Inference: Through this, I might get to know how much these children know about the water touch-points, how much it actually affects their lives and what they are willing to do about it as well as what they feel is ‘ideal’ and how much we can actually cater to actually fulfilling that. They will also be introduced to basic health and sanitation.

> Some of these things will be new to them

> They will be curios and ask me questions related to the same.

I began the presentation right after their lunch break. They were excited to see the presentation because of the novelty of the laptop, but already seem to know about what they need to follow in terms of health and hygiene, like many of us do! This was just to trigger off thoughts in their heads and act as a preamble to the artifacts they were going to be introduced to. The flash cards had two sides- the practice on one side and what one might miss, on the other. For example, it is not enough just to wash one’s hands. One needs to do so with soap. So, I asked them how many of them washed their hands just then, before lunch and all of them raised their hands. Then I asked how many of them had washed with soap, and they started laughing and put all their hands down. Similarly they store water collected from the open wells in covered matkas, but do not boil it before drinking. They were almost surprised when I said we must boil our water to remove the germs. Similarly, the do not have washrooms in school. The girls go in a big group behind the greenery to the right side of the school and the boys go out to the road and they do not wash their hands after. The washrooms in school are only for the staff! I told them about the importance of using the washrooms and to take a bucket of water while they go and wash their hands with soap after they are done (to make this easier for them, we made small hand-washing devices with soap strips attached to them so that they could take it out with them wherever they were going to pee). After this was done, we identified places in their school where these practices fit in and stuck the cards there so that each time they see it, they might just follow some of those practices. The staff and the teachers also came with us and saw us stick the flash cards. 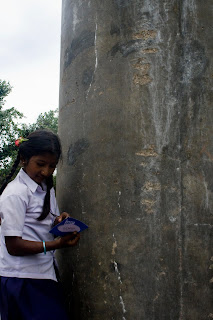 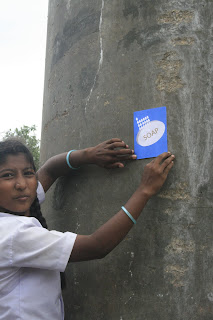 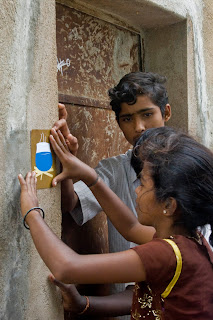 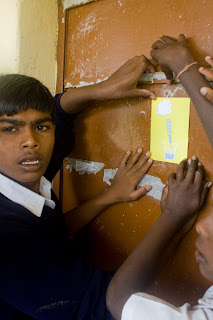 Putting up the boiling water card outside the school kitchen and the collect rainwater on the class door.

They assured me that they would stick it on the tank when its built in their school next month!

> Most of them know the facts

> They are more excited about the practical aspect of learning

> They enjoyed going out on a tour of the school and fighting over who would stick the cards in the appropriate places. It was almost like a treasure hunt. They decided that the one who was able to correctly state what the card talked about and identified the place would be the one to go stick it up. 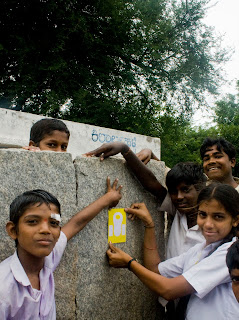 Posted by Aajwanthi at 5:00 AM

more and more interesting. How does the role of fluoride kick in?
Can they now identify dental fluorosis and the cause?
Can we get them to use rainwater in their household level tanks for drinking?