In Pavagada taluk of Karnataka, fluoride is endemic in groundwater and way above permissible limits (1.5 ppm). Three students from the USA have raised around 10,000 US $ and will be here in India during the month of August. In partnership with the Rainwater Club and an NGO called BIRD-K they will build rainwater harvesting tanks in 6 schools. This harvested rainwater will provide the school children with fluoride free drinking water for the time they are in school. Unavailability of clean water also affects the health and sanitation conditions in this area, which is abysmal. Addressing this, along with providing clean water is a big need. 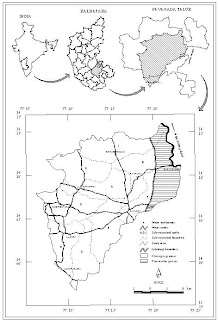 This project addresses the idea of health and sanitation in these schools in the Pavagada taluk of Karnataka, where the WATSAN (water and sanitation) conditions are abysmal due to unavailability of ‘clean/good’ water.
I would like to focus on hygiene promotion while introducing the needed tools/appropriate technology* that will facilitate change in behaviours linked to practices related to health and sanitation.  During this process I would also like to try and build some devices/toys with the children so that they can experiment with it in the different environments that they are exposed to.
Appropriate Technology is technology that is designed with special consideration to the environment, ethical, cultural, social, political and economical aspects of the community it is intended for. AT proponents claim that their methods require fewer resources, are easier to maintain and have less of an impact on the environment compared to the techniques from mainstream technology.
SCENARIO
Manjunath is a twelve year old boy who lives with his parents and his grandfather in the Pavangada taluk in Tumkur district. He goes to school during the day and helps his mother at home in the evening. His grandfather’s limbs had swollen up and he was paralysed. Many people in the village had similar problems and there was no cure for this disease.  His teachers said that it was called fluorosis and was primarily caused by excessive presence of fluoride in water or food. Fluoride content exceeding 1.2 mg per litre can cause fluorosis. A test conducted in all the villages of his taluk had revealed that the fluoride content ranged between 1.6 mg to 4.8 mg/ litre. ‘Where do I get clean water from and how do I prevent this disease from coming?’ were some questions that worried him. Soon he was excited as he heard that an NGO from Bangalore was coming to in his school to build a rain-water harvesting tank. This meant that he would get clean water while he was at school. Now, he only had to learn how to keep himself and his surroundings clean. Maybe fixing all those broken taps at school, making the toilets useable, unclogging the drains and making sure the hand washing tank is set up so people could wash their hands before eating and after using the loo were some of the changes that could be made in order to prevent this disease.


NEED
As seen in the above scenario, fluorosis is a serious illness and this district is badly affected by it. The water that this village is exposed to does not help improve their living standards. It not only causes flurosis, but also makes the conditions for good sanitation and facilities more difficult to obtain and sustain
“According to Taluk Health Officer Dr Manjunath, fluorosis can affect the teeth, ribs or other parts or manifest everywhere. Fluorosis can only be prevented and there is no cure once a person has been affected by it, he noted.” Deccan Herald (August 22, 2002)
Prevention is the best bet in this case. Now that organisations are working on getting fluorine-free water in some parts of this village, the next task would be to focus on health and sanitation and introduce these topics to the children at school, at an early age. Along with access to clean water, habits like using the right water for the right purpose, storing the water in the most hygienic way possible, hand washing and other health and sanitation related activities are equally important for prevention of diseases. Being able to propagate behavioural change during this particular time, while the children get exposed to clean water is also a good opportunity. There is a need for these children to know what kind of water they are exposed to and how they could improve/ set-up or change little things that they do every day in order to prevent diseases and lead a healthier lifestyle.
Water and sanitation go hand in hand- clean water is needed for people to maintain standards for sanitation, which in turn helps them remain healthy. Once provided with water, they need to be aware of WATSAN and how good sanitation is as important for them to lead a healthy life.
It is vital for human health- good sanitation leads to good health. It helps prevent many diseases that are prevalent in many rural areas and sometimes even the urban poor and urban areas. It is essential for survival.
It enhances dignity, privacy and safety- Access to good water and sanitation facilities lets people live with respect within a community and also aids in females feeling ‘safe’ and ‘clean’.
It protects the environment – Appropriate usage of water and disposal of faeces will protect the environment (manure and water).
Some areas that could be addressed are:
Hand washing at right times
Safe faeces disposal
Availability of water
Safe storage and treatment of water before usage
Overarching Goal
To bring about behavioral change by engaging students in these affected rural areas in a participatory mode to address the idea of health and sanitation by introducing them to appropriate technology. I would like to try and build some devices/toys with them so that they can carry this forward and experiment with it in the different environments that they are exposed to.

Challenge: Language is going to be a big challenge in this case. The students know Telugu and Kannada. I can understand Kannada, but am not fluent enough to communicate back in the same language. I will have to tackle it so that the language barrier is lessened. Using flash cards, toys and simple vocabulary is something I could try. I would also be getting help from the NGO that is working on the project, people who know the local language. The schools themselves, being so eager to interact with people from other spaces, I am hoping, will be open to new methods of learning and communicating.


III. PROCESS
IDEO'S HCD (Human Centric Design) process is something I would like to begin with.
Desirability – What do my target audience (children) want and need?
Feasibility – What is technically and organisationally feasible? What can I make/do within the given space and amount of time keeping in mind my skill sets?
Viability – What is financially viable for my target audience and me?
Quick
July (Week 1 and 2): Site visit, collecting stories and inspiration, field research, identifying problems and stakeholders
July (Week 3 and 4): Planning and setting up workshops with the students
August (Week 1 and 2): Continuing the workshops followed by assimilating insights and data obtained from these workshops
August (Week 3 and 4): Translating insights into ideas/opportunities/solutions
September (Week 1 and 2): Initial prototype
September (Week 3 and 4): User Testing and feedback
October (Week 1 and 2): Final Prototype and documentation
I would like to keep the word ‘technology’ open. The gadgets introduced could be actual ones like water filters, pipes to pump water up and so on, or even existing objects like toys that can be twisted so that they prompt them to be more conscious of their actions. They could even be little mascots that remind these children to a particular thing every day, an indirect way of spreading consciousness.
These workshops should be a fun way to deal with these serious issues. It could involve using tools such as storytelling, drawing, scenario building etc.
The next stage would involve developing the prototype which would be derived from the insights that I gain from these workshops and site visits. It might also be something that is created during these interactions themselves. The final stage would involve testing the prototype.

-  People and organizations that are involved in the larger project – BIRD-K and Mr. Vishwanath, Rainwater Club
(BAIF Institute for Rural Development-Karnataka (BIRD-K) is a voluntary organisation involved in Rural Development. It is a society registered under the Karnataka Society Registration Act , 1960.BIRD-K is BAIF's unit that is currently implementing development programmes in Karnataka and Andhrapradesh. This is part of a project called Sachetana, where the objective is to ensure safe drinking water especially in the flurosis affected areas through various rainwater harvesting measures and to improve the quality and quantity of ground water
Rainwater Club was started by Mr.Vishwanath and it is a forum that communicates, teaches, hosts workshops and conducts lectures and is a part of many live projects that educate people and helps them set up rain water harvesting systems.)
- Reports on water, health and sanitation from all over the world: case studies from the World Water Forum, UNICEF and WHO.

As an art and design student I have always been interested in socially responsible and sustainable design and this is an opportunity for me to put it forward on a working platform. Hence I decided to I work individually on a small part pertaining to my interest within a larger project that is being realised by the NGOs.  I hope to put to use the skills I have gathered over the years in Srishti during this project.  Some of my learning goals are:
- To look at design within a social and ecological context
- To look at participatory design methodologies
- To look at the role of a designer (myself) as an agent of social change
- To be able to experiment and build appropriate, effective solutions for the given context
- How to get past the language barrier to communicate with a certain audience
- To understand the social and economical background of a particular place and be sensitive to this and the beliefs of the audience


Directions the final outcome could take
The 'final product' could be a campaign, a system, a device or a toy that I might build as part of the process. It could be a mixture of all this, something that directly or indirectly prompts the children and gives them a nudge while introducing the idea of health and sanitation to them in whichever way possible.