However liberated I fee in such environments, it is weird, for me and the people around, if I just walk in and out of their space. They have seen me around, but I never got a chance to interact with the people whose village I was living in. This visit was long enough for me to walk around in the evening and document the water bodies. Here is where I met my new friends who showed me around the village. I went to photograph the open well where all of C.K.Pura gets its drinking water from. 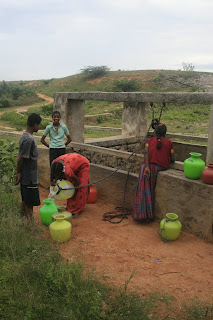 Here I met Mounica, Asha and Siri, three curious little girls who had come to take drinking water back to their homes after school was over. I went upto them and asked them if I could take a photo, in my broken Kannada. They obliged and asked me what I was doing there. After I told them, they decided to take me around the village, since it was play time anyway! Mounica graciously lent me her cycle (one that the government had provided her with to go to school) so that I could go for a spin as well! 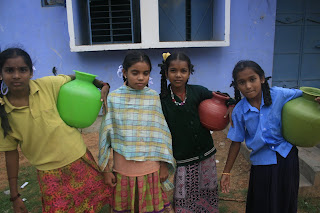 I asked them about their school and home and what their parents did. Asha insisted that I go to her house and her mother gave me ground nuts that she had harvested. It was all very overwhelming! We walked on the bund and they showed me the 'kere' which practically had no water in it. It was a beautiful view though. They told me that we wouldn't be standing where we were if it were raining. The water would overflow till it reached the fields. This water was mostly used for agriculture. They even showed me the marked stone which showed them how much water there was left. 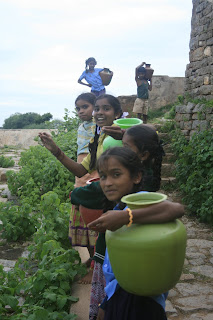 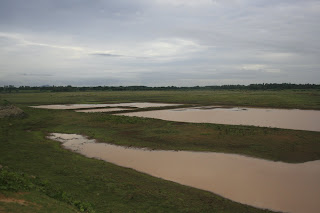 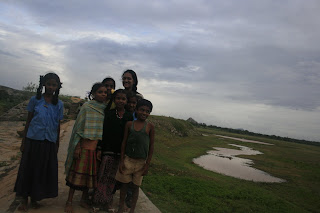 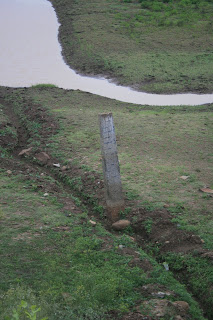 On the way, the showed me many plants and explained to me, what they do with it. They were not aware of the names of the plants, but they knew the uses. 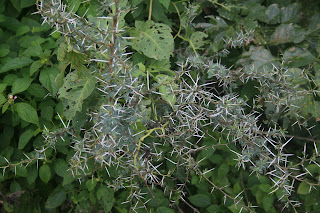 "These are the thorns that they use to pierce their ears and noses in the village" said Asha, pointing to her nose. 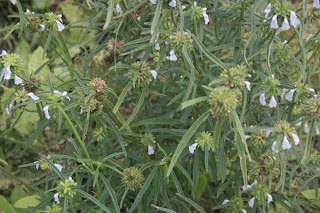 "These flowers are squeezed. There is some liquid that comes out. The make soap out of that!" said an excited Akhila 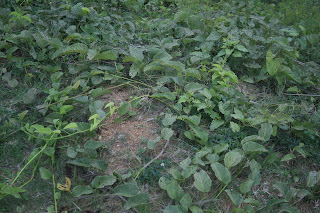 Asha uses these long stemmed plants as her skipping rope, something she plays with everyday.
After this, we visited the Kalyani, a tank they have a bath in before they visit the temples and on festivals. They also swim in it occasionally. Akhila poured a few pots of water on the new cement slab they had built for a god's statue. The water from the Kalyani was pure and clean, she said. 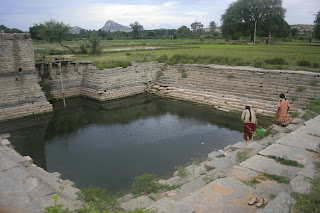 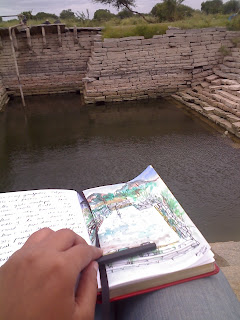 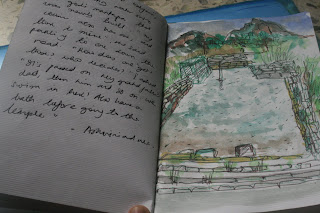 Posted by Aajwanthi at 9:55 AM

This is one heck of an exciting work...and the blogging is great.

Shoul also be good to test the open well water and the kalyani water for fluoride content.

Yes Mr.Vishwanath! Was wondering how to make this a fun activity for the kids. They should actually go around and tests all sorts of water samples they are exposed to. That will help them become more aware of the fluoride levels and flurosis right? Also an informal way of data collection! :)