Aim: To empower the students and make them share the knowledge they have gained

Trying to make them retain more of what they have learnt

I went to talk to Arzu about my project a few weeks ago and she told me about this three tyre system. A Political Visionary (One who is in charge of the larger politics and functioning- could be in the NGO or funders in this case), a Conceptual visionary (One who conceptualises the vision which could be me, in this case) and a Practical visionary (which was also me because I was conducting all the workshops and making it happen). Instead, she said, why don’t you empower the children to be practical visionaries? I thought this was a great idea because I saw for myself that I learnt most when I had to teach and work with these kids. This would just empower them some more and make them feel confident about what they have learnt and share it with their schoolmates too. So, I told the 9th standard students to prepare an afternoon session for the 8th standard kids. I told them to write down what they would ask them or say to them. Beginning from the basics of what fluoride is, what it is present in and what its harmful effects were and what they needed to do about it. I gave them all the visual aid I had and told them that I was going to be a student and they should take the class and not ask me what to do. We set up chairs outside and they went out to start their lesson. Boy, were they awesome! Better than me any day! They make the little ones jump up with joy and test their respective village’s water that they were carrying in their bottles and stamped them as ‘good’ or ‘bad’ water. The standard 8 kids were so excited that they wanted to test their school rainwater for fluoride and found that it had zero fluoride. They loved it. They also told them about rainwater and how to maintain a rainwater tank by cleaning the top of the roof up 10 minutes before they feel it is going to rain. They told them that they have to help each other maintain the tank that is going to provide them with fluoride free water. 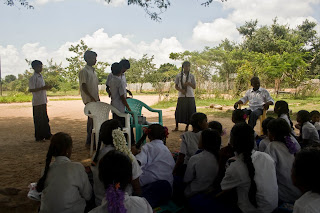 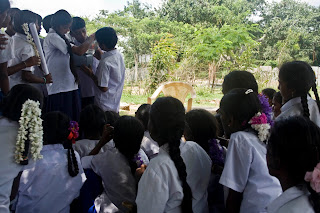 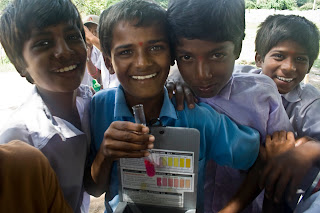 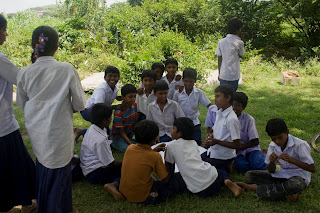 Some of them gave up after some time and went back to class while a few stayed back to finish the lesson. This made me figure how many of them understood what I was talking about! I was surprised to find out that even though they were all in the same campus and the 8th std. Kids have been watching what I do with the 9th, they had no idea about what it was all about. Fluoride and rainwater was as new to them as when I started off with standard 9. It was great that they were able to share what they had learnt, though they told me at the end that they were a much better class. ‘These 8th standard kids are still small and irresponsible” they said!

This is exciting and fun stuff and much learning.
Peer to peer learning is motivating and the seniors saying that the juniors are not as good as 'em is universal.:)
Also great to see that rainwater is fluoride free and hopefully will be bacteria free too.