Having fun with soap

Aim: To build an experience around hand washing and doing so with soap to integrate it with the bottle we had built earlier

Activity: 'Seeing the unseen' was the most effective theme running through these activities. When they see something, it affects them much more than talking about it (like in the case of testing for fluoride). First I spoke to them about soap and what it does. Then I showed them images of virus and bacteria and hands under UV light so that they could see these microscopic germs. It would have been ideal to carry a microscope and show them their hands under them, but sadly I was not able to source one on time. They were really grossed out by the image of the hand infested with bacteria and exclaimed asking if they really had that many germs on their hands! 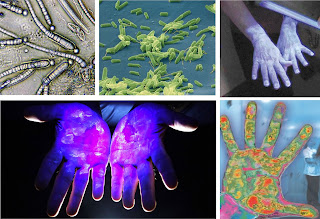 (Images above are from google)

Then I gave them sheets with my examples and told them to draw their own germ. Something that they thought was on their hand and name their germ. After which, we went out to wash this germ off their hands. Here are some of the things they came up with. One of them named her germ after another girl in her class! 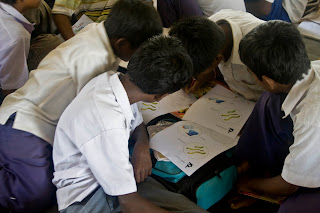 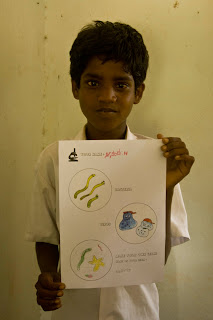 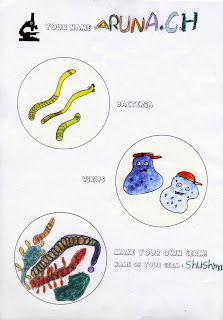 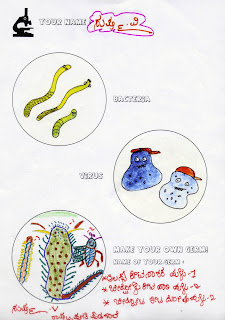 Then I demonstrated a simple experiment using oil, water and soap to show them how soap works and a little bit about the chemistry behind soap. Here is the experiment.

1| Take two jars and fill them half full of water. Add a drop or two of food colouring and shake.

2| Add some cooking oil to both the jars. 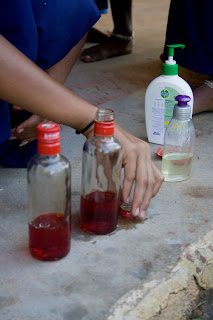 3| Add a few squirts of liquid soap to one of the jars. Put the lids back on tight and shake them for about 30 seconds.When you first put them down, there's not much difference between the two jars. The oil and water molecules are all quite well mixed together. 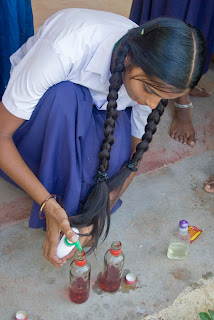 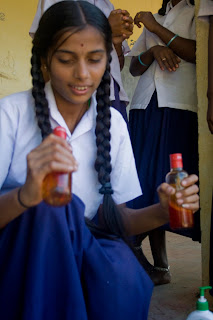 4| After only a minute or so, you'll start to see the jar with just oil and water in it start to re-separate. The jar with the soap in it is still mixed together.

5| After several minutes, the oil and water only jar has almost completely separated again , but the jar with the soap is still mixed! (as you can see in the bottom right image) 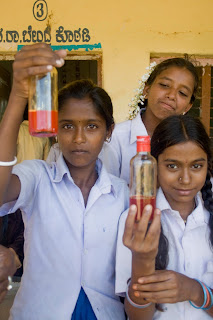 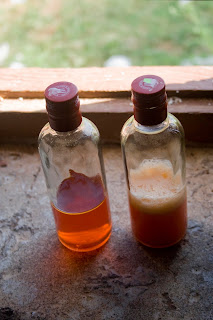 Well that's where soap comes in. Soap is actually a very long molecule that has one hydrophillic end and one hydrophobic end. The water sticks/bonds with the hydrophillic end and the oil sticks/bonds to the hydrophobic end. Two opposing molecules with the soap in the middle. As the water is rinsed away, the soap sticks to the water, and the oil sticks to the soap. Clean!

After this, I asked them who all had soap at home and was surprised to see all of them raise their hands. I asked them how many of them use it to wash their hands and about 4 put their hands up, I doubt they also do it regularly :) These were only the hostel kids who were given soap for free in their hostel. They proudly announced that they got Mysore sandal soap (the more expensive variety)! Many kids used Lifeboy or Medimix which was the cheapest in the shop we visited. Around Rs.6- Rs.10 a bar. They use it only when they have a bath (twice or thrice a week) and once a day to wash their face. They wanted it to last longer and hence did not want to 'waste' it to wash their hands with them. So, I tried explaining to them that it is essential to wash off those germs from their hands and that they would have to spend much more (I found out that they approximately spend around Rs.50 for consultation and Rs.50 for medicines) each time they visit the doctor in their village for gastric troubles or simple illnesses. We discussed how it is better they spend a little more and stay healthy than spend so much on the doctor and they seemed to agree!

Then, we went out to the courtyard and dissolved a bar of soap to make lots of soap solution for the whole school, to keep near their water tank for them to use. The rest we used to wash our hands and make bubbles and have fun. I taught them a hand washing song in English that we sang with actions. Then I explained to them what it meant and they helped me translate it into kannada and sang it in kannada too! They boys of course turned it into a local 'dappangutthu' type dance song, which was also pretty fun! I still have to upload the video from the casette, it will be up soon!

A hand washing song to the tune of Frere Jacques 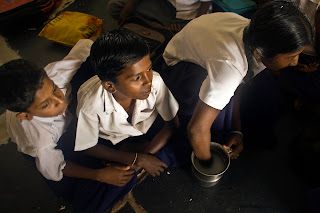 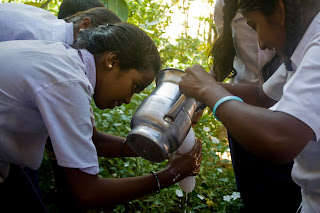 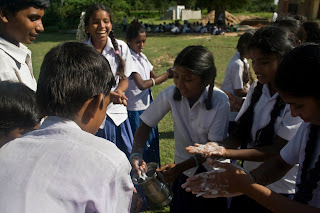 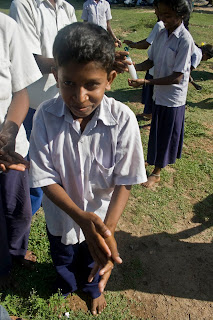 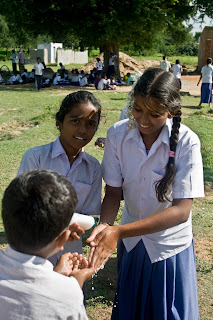 They asked me what they should do once this solution got over. Before I could answer, one of the kids said "this soap is for all of us right? Once this is over, we can all get small pieces from our big soap and make lots of solution and use it!" This was the highlight of my visit.

They took the bottle to lock it up in their principal's office at the end of the day so that no one would waste it! This would be an amazing system, if it works.

This was insightful in many ways. Even a small thing like soap can show class distinction where the hostel boys used Mysore sandal everyday while some of the lower class children used only Medimix and only when they had to. They all knew all the brands available in the two shops in their village though! How much each one costs and everything!

Posted by Aajwanthi at 1:25 PM